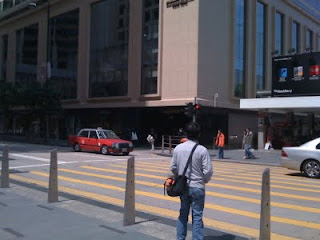 There is a new breed of democracy fighters today. They are young, vociferous, action-based, and most significantly, have scant regard for the established order. And their targets include the Pan Democrats. They are seeking to redefine meanings of friend or foe in our otherwise stale political spectrum. Some find this new development exciting. Others are worried what all this will lead to.
Just last Sunday, this new breed of fighters, in the name of People Power, turned up in force to prevent the Pan Democrats from staging a public function in Times Square. The Pan Democrats' function was intended to be part of a movement to galvanize Hong Kong people to oppose the Government's plan to scrap by-elections in order to prevent "abuse" of the election system by resignations. This is a cause which the new breed shared. And yet, despite the commonality of goal, they shouted abuse and insults at the Pan Democrats present, in particular, members of the Democratic Party. Their abuses and insults were so fierce, one may be mistaken to think the recipients were supporters of the Government's proposal. Perhaps that was the picture members of People Power wanted to paint. But why? And to what end?
All this started from the 5 District Resignations. Apart from the League of Social Democrats and the Civic Party, the Pan Democrats did not take part in that movement. But most Pan Democrats, especially leading members of the Democratic Party, did help out individually. Still, this created so much animosity amongst members of the LSD that the rift within the Democratic Movement became wider than ever and apparently irreparable.
Then came the political reform. The Democratic Party and individuals who negotiated and struck a deal with the Central Government and supported the improved reform package were branded "traitors". Since then, the more radical supporters of LSD formed the People Power and the battle line within the democratic camp is now clearly drawn. The enemy is no longer the pro-government parties or individuals but members of pro-democracy movement itself.
What sparked off this sea change is seemingly mere internal disagreements on the strategy to adopt in the fight for true democracy. Take the events of last Sunday as an example. What prompted the People Power to disrupt the Pan Democrats' function is simply that the latter did not join with the People Power in calling on people of Hong Kong to stage a siege of the Legislative Council on the last Council Day. It is important to note that the Pan Democrats did not oppose the proposal to besiege the Council. Some had even agreed to take part. But still, the passive behavior of the Pan Democrats invoked the wrath of People Power. Failure to support their proposed line of conduct is enough to cast all those who dare to disagree as "traitors", as politicians without morals or principles. And deserve to be ridiculed and annihilated.
What is more worrying is the threat to unseat all leading Democratic Party members in coming elections. You may ask, how does this help the democratic movement? Nobody knows. Certainly nobody has explained what would happen or how will the people of Hong Kong fight for democracy, if the Pan Democrats are destroyed, or the Democratic Party is discredited and reduced to nothing. Perhaps the aim is to weaken the Pan Democrats' presence, and consequently, what little political power they now have, in the Legislative Council. Perhaps the aim is to weaken the Pan Democrats to the extent that they have to beat retreat from the Council and join the People Power in fighting for democracy in the streets. Perhaps the aim is to seek to replace the Pan Democrats with the People Power as the only true Democrats in Hong Kong. Perhaps the aim is to show how pointless it is to seek Democracy through peaceful means. Perhaps the aim is all of the above. Nobody knows. But if this is the plan, no one knows if such a plan will succeed. Only time and the coming election results will tell.
Posted by Ronny Tong at 4:36 PM

Its not my first time to pay a quick visit this website, i am browsing this web page
dailly and get good information from here every day.

Here is my page :: calculate bmr