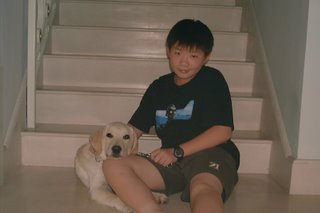 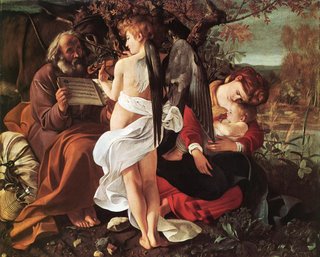 If you exit the Pantheon to the right and then turn immediately to the right again, you will come to the piazza della Minerva, where Bernini’s famous Elephant Carrying an Obelisk is. Turn left down the winding street, just before you reach via del Corso, you will find Galleria Doria Pamphilj*, not far from piazza Venezia.

Don’t let the ordinary wooden white gates fool you. Inside, you will find an abundance of visual treasure that you will not regret risking the trip. And my “Old Friend” too. This is where I first become acquainted with “Rest on the Flight into Egypt” by Michelangelo Merisi da Caravaggio (Milan, September 29, 1571—Porto Ercole, July 18, 1610).

Let me explain. I first found this painting when my wife and I spent our honeymoon in Rome (but that’s a different story). I was so struck by the beauty and theme of the painting that I simply cannot forget it. It wasn’t until 30 years’ later that I was able to come back and visit my Old Friend. Despite the years, it still retained its glory and charm. Except now it has a room to itself with all the modern security features and lighting.

Why am I attracted to this painting? Well, it’s hard to put into words. Perhaps it is the perfect blend of classicism with naturalism which made such a breathtaking entry into the art world in the late 16th century (the painting in fact was an early work of Caravaggio, in 1598, to be precise; it was the first biblical painting of the artist). Perhaps it is the allegory relationship between music and religion, two subjects which I find myself unable to fathom. Then and now. Or the contrast and exchange between youth and old age, a favourite theme of Caravaggio.

Or perhaps it is the mysterious and rebellious life story of the painter which fascinates me. It is only recently that we learnt that Caravaggio was born in Milan and not in Caravaggio, where his family owned some property. Roman judicial records from 1600 to 1606 tell us a story of duels and brawls and constant brushes with the law. He was forced to flee from Rome after committing murder. His life as a fugitive marked his downfall when he eventually died a young man of 39, in 1610, in a desperate attempt to reach Rome from the prisons of the Spanish enclave of Porto Ercole.

But what does it matter? A good painting is a good painting. I even have a replica of it hanging on the wall of the stairs to my dinning room at home. I have it as a screensaver on all my computers. And I dream about it when I am stuck in the chamber of LegCo, being forced to listen to endless rigmarole. It is like an old friend to me. I certainly look forward to going back to Rome when I can visit him again, though I know not when. But if you go back before I do, please pay a visit to him and let me know how he is doing.

* The gallery of Pamphilj is a private museum housed in the palace of the Pamphilj family. There is an admission charge and the museum is not open everyday, so you will need to check before you go.
Posted by Ronny Tong at 10:19 PM No comments: Links to this post 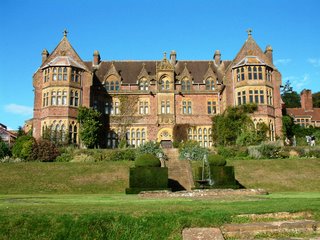 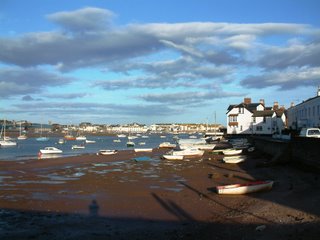 英國的鄉郊是出名的懶洋洋得來更覺迷人。在這裡，最大的問題可能是：今天想吃那一種海產？Mussels or seabass?這一刻，香港是那麽的遙遠........
Posted by Ronny Tong at 5:35 AM No comments: Links to this post