In more ways than one, a wife is definitely an asset to any politician.After all, a wife is generally regarded as a symbol of family values. Her sense of fashion, her demeanour and appearance can woo female, and sometimes, even male voters. But best of all, a wife can be a shield; an expendable collateral.And in Hong Kong, a wife is exactly that to many prominent people in public office. Just look at Henry Tang, the aspiring Chief Executive candidate; and now, Paul Chan Mo-Po, affectionately known to the Hong Kong press as Po-po. Affectionately,because he is such a rich provider of news worthy stories.

Within days of becoming the Secretary for Development, Po-po was involved in a scandal concerning subdivided cubicles of a flat owned by his wife. “It’s my wife’s, my mine!” proclaimed indignantly by him at the time.  And just this week, when the media discovered his family owned 3 plots of land within the area of the great North East Development Plan, a huge government project overseen by him, he shouted exactly the same thing at the top of his voice. So it is his wife’s; or perhaps his wife's and his son’s, one is not too sure nowadays; but is it a defence?

Our Chief Executive, Mr. C. Y. Leung, seeing the proclamation is not winning any forgiveness in LegCo nor understanding from the press, quickly came to Po-po’s rescue. “This is all strictly legal,” he says, “as a member of the Executive Council need not report any interest held by a wife!”. Presumably,the rule, or the lack of one, also applies to a husband.  This is all very civilized, some say, for a wife is a separate and distinct being and an equal. And who cares anyway. But is a wife separate and distinct from her husband in the field of conflict of interest?

Okay, let’s look at some of the comparable rules. Under the Securities and Futures Ordinance, a law regulating our financial markets and dealings therein, a wife is not regarded as separate and distinct from her husband; and vice versa. A person's spouse, or reputed spouse, or any person cohabiting with that person as a spouse,is regarded as an “Associate”of that person for the purposes of whether someone is in control of a corporation and issues relating to market misconduct. And a person is regarded as having an interest in the securities of a corporation if he is in control of that corporation by reference to the definition above, namely, if his wife has an interest in that corporation. Furthermore, any interest held by the wife is regarded as the husband’s interest and is reportable interest under the rules of disclosure for listed companies.

So when our dear Po-po has simmered down and has time to reconsider the rights and wrongs of a person in public office, perhaps he would come to the inevitable conclusion that if he can’t be accountable to the people of Hong Kong, he should simply resign. 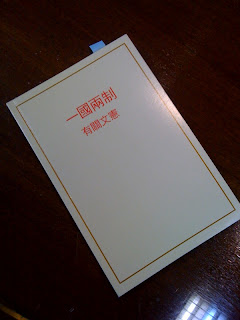 當然，一定會有人認為這種選舉辦法不是絕對令人滿意；但毋庸置疑，這種選舉辦法也是一種符合民主原則的普選制度，與比例代表制如出一轍。不尋常的情況可能需要以一種獨特的方法解決。只要不侵犯基本原則，以上所談的另類選舉辦法也值得所有希望普選在香港盡快落實的人思量。
Posted by Ronny Tong at 8:53 AM 2 comments: Links to this post 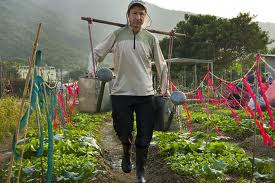 回程上不禁默默地想，社會當然要發展，但是否以整體利益之名便可漠視社會公義，欺壓弱小？這社會不公義的事實在太多太多了；老伯問得好，我可以為他們做甚麼？
Posted by Ronny Tong at 4:13 PM No comments: Links to this post Posted by Ronny Tong at 4:31 PM 2 comments: Links to this post