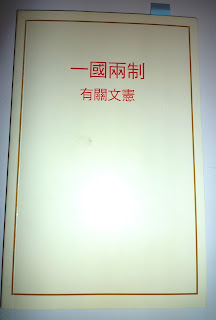 Last Sunday was the 15th anniversary of the establishment of the Hong Kong SAR. But while there were fireworks over the Victoria Harbour celebrating Handover Day, there were a few hundred thousand people still marching in the street calling for the stepping down of CY Leung. That must be a record for any “elected” leader of any community to be so humiliated on the first day of office.
That there is celebration and demonstration marking this most important day in the history of Hong Kong at the same time, is more than just an irony here. The debate is not whether there were 400,000 people in the streets, or just over 100,000 as some academic claimed; but what such an unprecedentedly unpopular Chief Executive will do to an already fragile and apprehensive community. Just ask any man in the street.  What he will tell you is that the new Chief Executive will herald the coming of Article 23 legislation, the complete breakdown of relationship between the executive and the legislature, and the erosion of all the core values of Hong Kong such as the Rule of Law, Press Freedom, Freedom of speech, of demonstration and of the person. You may say there is no proof of that. But the perception is there. And perception is two-thirds of the truth in politics.
But some will tell you it is not all perception. Relation with LegCo is indeed at an all time low. Even before he took office, Mr. Leung tried to ram his government restructure proposal through LegCo without proper consultation or much supporting information. He refused to talk to the Pan Democrats and did not name any of them to his cabinet lineup. And right after the Great March on the First of July where 400,000 took to the streets, what did he do? Instead of immediately start working with LegCo to deal with the demands of those who took to the streets, he went to "consult" the public by going to the districts. This is as insulting to LegCo as it is pretentious. All the demands of the people who joined the March were long the demands of LegCo. And in any event, what district community in Hong Kong is more representative than LegCo? Furthermore, these events are all staged with the help of pro-government parties. But even then, such events were marred by protesters disrupting proceedings. So who will be fooled by such pretensions? Very few, no doubt.
Nor can the writings on the wall be ignored. Press freedom indeed is diminishing. When state leaders come to Hong Kong, the press is being treated as lepers. They are being pushed to places as far from the leaders as possible and any questions touching sensitive issues such as June 4th will be met with immediate false arrest. Press cameras can be blocked by police whenever they like. Government Information Service no longer dishes out information regularly and fairly to all. Instead, Government prefers to release information to "friendly" newspapers in couched terms. Even the Central Policy Unit is now headed by an ex-executive of a leftwing think tank.
Freedom of expression is also going from bad to worse. When it comes to the Central Government or the Liaison Office, anything near a criticism is strict taboo. Wearing a June 4th T-shirt in the vicinity of a state leader can be an unspeakable crime. Students can be false imprisoned on their own campus. Demonstrations are now near pointless as demonstrators are being exiled to places where their presence or voices can never be seen or heard. It is almost like we are living over the border. It is almost like Mr. Leung is heralding the arrival of a repressive regime.
So how can you blame the people for feeling unrest? Or being apprehensive? How can they trust Mr. Leung? Although most are convinced that the feeling is mutual. It is not openly said. But the actions of Mr. Leung speak volumes. But why is it that the people of Hong Kong cannot be trusted? Why cannot the Pan Democrats be trusted? From the point of view of most people, this is a paranoia few can understand. Why fear democracy? Or human rights? Or freedoms?
It is said that the best way to remove distrust is to communicate. But Mr. Leung and LegCo, in particular, the Pan Democrats are not speaking to each other. In fact, he did his utmost to avoid speaking to the Pan Democrats during his election. And there is all the more no reason to speak to the Pan Democrats after the election. The sound of silence is stunning. And this failure of communication may well prove to be the most destructive force in the complete breakdown of the One Country, Two Systems. 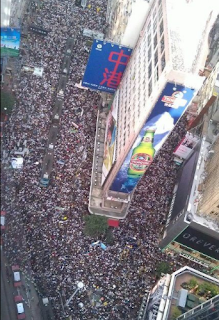 轉瞬間，我們已一起走了十年。無論在烈日當空下，或在淒風慘雨中，這七一精神還是延續下去。但普選仍是若即不及，公義亦仍是每況愈下，還有什麼可說？只好以一句「你我同行，路遙不倦」共勉之！
Posted by Ronny Tong at 10:22 AM 3 comments: